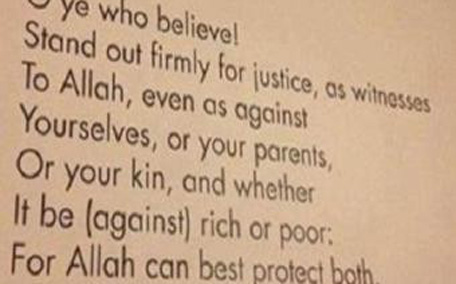 The US Harvard University has posted a verse of the Holy Quran at the entrance of its faculty of law, describing the verse as one of the greatest expressions for justice in history, a Saudi newspaper reported on Sunday.

Verse 135 of Sura Al Nisa (women chapter) has been posted at a wall facing the faculty’s main entrance, dedicated to the best phrases said about justice.

A Saudi student who studies at Harvad published a picture of the poster in his Twitter page, according to the Saudi Arabic language daily Ajel.

“I noticed that the verse was posted by the faculty of law, which described it as one of the greatest expressions for justice in history,” Abdullah Jumma said.

Harvard University was established in Cambridge, Massachusetts, in 1636 as the oldest institution of higher learning in the United States.