A large dome without columns is centered in the Tabuk University mosque in northern Saudi Arabia, according to structural engineering and unique design, in which Islamic architecture and arts of Islamic civilization and the aesthetic of modern architecture blended, and Friday prayers were performed at the Friday Mosque, marking the opening of it in front of worshipers, amid precautionary and health measures according to existing recommendations from the relevant authorities Relationship to ensure the safety of worshipers.

The “University of Tabuk” mosque is one of the famous landmarks in the region, and at the level of Saudi universities, and it was built as a teacher celebrating the Islamic and urban civilization of the city of Tabuk, and a prominent center for Islamic religious sciences.

According to the Saudi Press Agency, “SPA”, the mosque is characterized by a set of architectural features that make it one of the finest architectural masterpieces at the level of mosques, as the total area of ​​the mosque is 8000 square meters, and its capacity is 3500 worshipers, and it contains two minarets, each minaret with a height of 50 meters, and its roof is In the form of a dome covered with mosaics with an area of ​​5887 meters.

The facades of the mosque are made of double glazing with a high degree of transmittance of light. The walls and floors are covered with granite and marble, and aluminum works were used for the two minarets and decorative walls, while the area of ​​the mosque’s external squares and parking spaces is 30,300 meters, and car parks accommodate 380 cars.

The mosque is characterized by a natural lighting system of the dome of the mosque and glass walls, a central air conditioning system for the mosque, and a BMS management and control system, as well as an alarm system in the event of a fire, and an advanced system of acoustics, as the entrances are covered with granite squares, and the floor of the mosque courtyard has marble tiles and glass walls, and the mosque roof is formed Of aluminum suspended above the mosque courtyard, aluminum claddings, glass of the circular beam, the wall decor and the lighthouse. 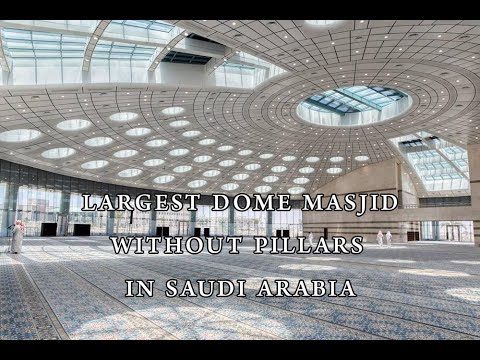 A large dome without columns is centered in the Tabuk University mosque in northern Saudi Arabia, according to structural engineering and unique desig...