AKRON, Ohio (AP) -- Twin girls born with a rare condition in Ohio were breathing on their own and their mom said she and her husband were able to hold them on Mother's Day.

Sarah Thistlethwaite said babies Jillian and Jenna were removed from ventilators Sunday afternoon after they were able to breathe comfortably. She told The Associated Press that she and her husband Bill both held them for a while on Mother's Day.

"It's just hard to put into words how amazing it feels to know the girls are OK," she said. "It's great to know that they're doing so well, and being able to hold them."

The identical twin girls shared the same amniotic sac and placenta. Such births are called monoamniotic, or "mono mono," and doctors say they occur in about one of every 10,000 pregnancies.

They were born Friday at Akron General Medical Center, grasping each other's hands when doctors lifted them up for their parents to see after delivery.

Thistlethwaite told the Akron Beacon Journal (http://bit.ly/1hG517d ) that was "the best Mother's Day present ever."

They were moved temporarily to Akron Children's Hospital because they needed breathing assistance. Thistlethwaite expects to be released from Akron General on Tuesday, while the girls will remain in the hospital two to four weeks.

Dr. Melissa Mancuso helped deliver the twins, one of several amniotic pairs she has helped deliver in 11 years. She said the twins are at risk during pregnancy of entanglement of umbilical cords, which can cause death. Another woman at Akron General is expected to give birth later this week to monoamniotic twins.

Sarah and Bill Thistlethwaite, of Orrville, Ohio, have a son, Jaxon, whose first birthday was Jan. 27. That's the day they also found out she was carrying twins.

They rushed to prepare their home for the twins, and Sarah was soon on bed rest.

A middle school math teacher, she went into the hospital on March 14.

"It's hard, it really is," she said of extended bed rest. "It was very mentally challenging knowing I have to sit here all day."

Besides television, books and "trashy gossip magazines," she viewed YouTube to learn how to crochet baby hats.

The girls were born at 33 weeks and two days. Mancuso said there were only minor issues during the pregnancy.

Sometimes the girls would kick the monitors off.

"I don't know what they're doing to each other," Sarah said jokingly of her "sweet girls."

(c) 2014 The Associated Press. All rights reserved. This material may not be published, broadcast, rewritten or redistributed. Learn more about our Privacy Policy and Terms of Use. 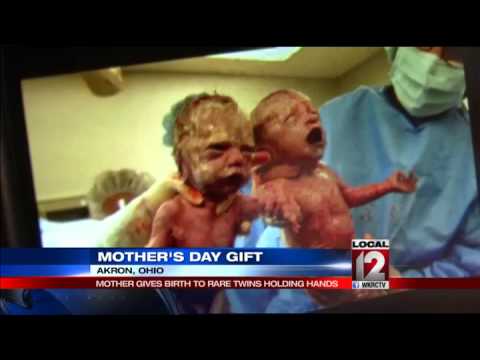 AKRON, Ohio (AP) -- Twin girls born with a rare condition in Ohio were breathing on their own and their mom said she and her husband were able to hold...