The Chairperson of the Commission, Moussa Faki, said that Ethiopia, Egypt and Sudan should discuss their differences with regard to the construction of the Grand Renaissance Dam.

During the meeting, Gudu stated that Ethiopia, Sudan and Egypt have engaged in discussions on the construction of the Grand Renaissance Dam and the position of Ethiopia.

At the time, Gudu stated that he would not accept any colonial treaties signed by Ethiopia that were not involved in the Nile.

He also said that the first phase of the dam is being carried out in accordance with the scheduled time.

He also noted that the African Union should take principle-based support, noting that Ethiopia has the legal and natural right to accelerate its development using its natural resources.

Chairperson of the African Union Commission, Musa Faki Mahamat, on his part said they believe African solutions to African problems are needed.

According to a spokesperson from the Ministry of Foreign Affairs, the African Union said it would focus on this.

He also indicated that the union would work to facilitate forums for the three countries to come closer and discuss their differences. 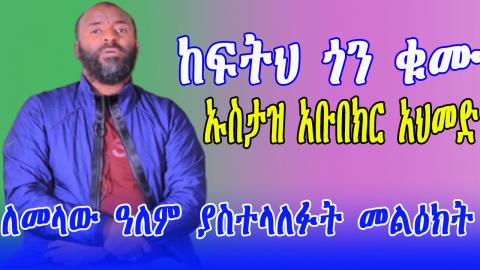 The Chairperson of the Commission, Moussa Faki, said that Ethiopia, Egypt and Sudan should discuss their differences with regard to the construction o...