A parent shouting Allahu Akbar and thought to be wearing an explosive vest has been shot dead by French police near Paris after allegedly beheading a school teacher with a knife.The victim was said to have been a school teacher who had enraged parents by displaying cartoons of the Prophet Mohammed to pupils.A source told Le Parisien: ‘The victim had recently given a lesson to his students on freedom of expression and had shown the caricatures of Muhammad’.This led to an enraged parent confronting the teacher with a kitchen knife, and then cutting his head off, said the source.The first bloodbath took place in Conflans-Sainte-Honorine, a suburb some 25 miles from the centre of the French capital on Friday.French anti-terror prosecutors confirmed they were investigating an assault in which a man was decapitated on the outskirts of Paris.The attack happened at around 5 pm (1500 GMT) near a school in Conflans Saint-Honorine.  'The body of decapitated man was found at around 5.30 in the afternoon,' said an investigating source.'When police arrived, the person thought to be responsible was still present and threatened them with his weapons.'The unidentified killer then fled to the nearby town of Eragny-sur-Oise, around two miles away, where he refused to surrender.'He was waving a gun by this time and further threatened officers,' said the source. 'This is when he was shot dead by police.. Around ten shots were heard.' Anti-terrorist prosecutors immediately became investigating the incident, said the source, who said the attacker was being viewed as a 'suspected terrorist'. French news station FranceNews24 suggested that the attack was related to cartoons of the prophet Muhammad published by Charlie Hebdo. Witnesses watched the man decapitating his unnamed victim – who was also male – in broad daylight, and close to a school. Share this article Share Officers rushed to the scene after the alarm was raising, and watched the killer running away, towards Eragny.By 7pm, the scene of the suspected murder, and the scene where the killer was himself gunned down, had been sealed off.Interior Minister Gerald Darmanin was ‘making his way to the scene of the attack,’ said a spokesman for his ministry, who also confirmed as a terrorist enquiry. The attack follows a terrorism enquiry being launched in Paris last month after two news agency staff were stabbed outside the former offices of Charlie Hebdo – the magazine where staff members were murdered in 2015 after publishing cartoons mocking the Prophet.Those on trial range in age from 29 to 68, and are charged with providing logistics to the terrorists, including cash, weapons and vehicles.Paris-born brothers Said and Cherif Kouachi murdered 12 people in the Charlie Hebdo offices using Kalashnikovs, before escaping in a stolen car, and later being killed by police.A third terrorist, Amedy Coulibaly, gunned down four shoppers in a kosher supermarket and a policewoman during three days of carnage before h 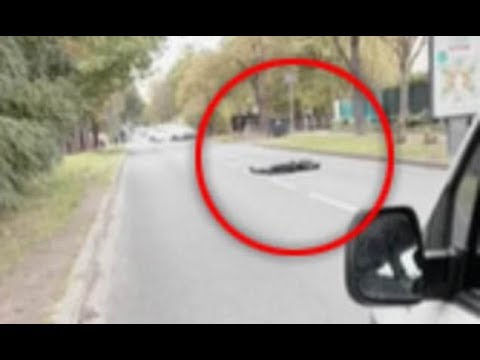 A parent shoutingAllahu Akbar and thought to be wearing an explosive vest has been shot dead by French police near Paris after allegedly beheading a s...