The best speech ever in court? Some say, yes!

Follow here: http://CorruptionCripples.com [To the judge:] Give me a chance... give me a chance... Give me a chance, don't cut me off. I'm not defending myself, I'm defending you. He gets to bring his files in, while Saddam Hussein must write on his hand what he wants to remember to say to the judges. "Your honor, I want you to be like lances and swords confronting the enemies." ... "I am not here to defend Saddam Hussein. As I've said before, Saddam Hussein is too great to be defended by Saddam Hussein himself." ... "No, please. I am not a student in your school. Don't make me speak in a way that none of us want. He interrupted me and went on talking. You didn't silence him. He asked a question, and my answer is: 'Yes, I was beaten all over my body, and I bear the marks to this day. Yes, we were beaten. We were beaten by the Americans. We were tortured, each and every one of us. When that man gets up, he has to lean on the wall so he doesn't fall. He received rifle blows to the neck, until they crippled him. That one was crippled. Barzan was crippled. Abu Nadia â€" they even took the bones out of his legs.'" "Saddam Hussein â€" in the American democracy that has been put to shame here, in great Iraq â€" was not allowed to wear his watch. This is not my watch. The watch I had they stole. One of my daughters, whom they exiled, gave her father a watch as a present. That is the watch they prevented Saddam Hussein from wearing. I'm only saying this so you can make the comparison. They tore the robes I was wearing all the way down. This way, they believe, they are hurting Saddam Hussein, diminishing his personality. But Saddam Hussein's personality is not measured by his clothes. This is a mark of shame on them, but it only makes Saddam Hussein greater, not smaller...." Barzan Tikriti [His brother, I believe]: "Your honor, those lowlifes are laughing and cursing." Saddam Hussein: "In any case... Barzan, let those monkeys laugh. A lion doesn't care if a monkey in a tree is laughing at him. Take it easy. Look at me, I don't care about this nonsense http://s-0o.blogspot.com/ Follow here: http://CorruptionCripples.com

The best speech ever in court? Some say, yes! 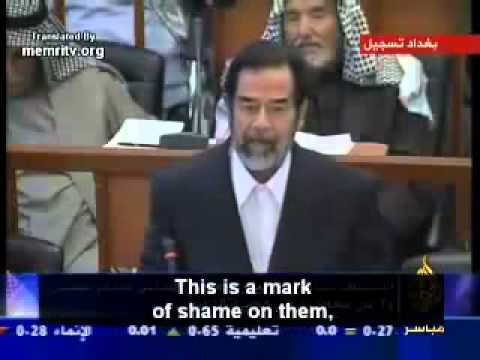