Video of a man beating "an Egyptian expatriate" in Kuwait, and an official resigns in anger at the i

Kuwaiti citizens shared a video on Sunday, July 26, 2020, showing a Kuwaiti citizen assaulting an expatriate, whom Kuwaiti accounts said was Egyptian, in one of the food sales associations, which prompted the president of the society to resign, due to the pressure on Her assaulted immigrant has to waive his right.

Repeated assault: In the video, a man was waiting for the turn to pay the account in the Sabah Al-Ahmad Association building, and as he approached the accountant (who is a newcomer) he started screaming, then hit him on the face, and then he kept screaming to repeat his action twice, while the accountant kept silent, so he intervened after that Two members of the security of the association, and deport the aggressor to the expatriate.

Kuwaiti political activist Sheikha Al-Jasem, posted the video on her account on Twitter, and wrote: "A citizen hits a cashier in # Sabah_Ahmad Al-Ahmad Al-Taraqeen on his face, and the values ​​of the scarecrow enter and force the assailant to give up his right, where are the ethics? Where are the rights, the board of directors of the association?" Mr. Nasser Dhmar Al-Osaimi, so we thank him for the weakest faith, as Boyce spread to him, denying pre-Islamic pressures.

For his part, the account of the "Majlana News" website, which specializes in publishing Kuwaiti parliament news, published the video, and said that the expatriate who appeared was Egyptian.

Video of a man beating "an Egyptian expatriate" in Kuwait, and an official resigns in anger at the i 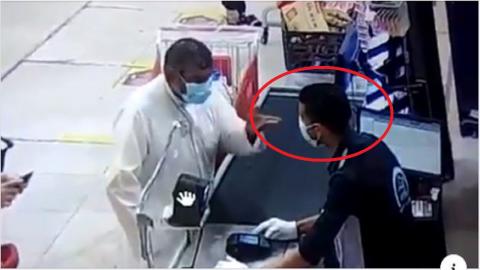