Woyzero Wubalem speaks the truth || She needs our help

She was the first daughter of her family, and most of the household responsibility was placed on her. She was only 18 years old when her mother was bedridden and unable to bear the burden of living with an illness. When her father, who managed the family by trade, was the only option to earn a living, sending their eldest daughter, Jemillah (her name), to Arabia, through illegal brokers. Djibouti and Yemen joined a group that traveled to Saudi Arabia to cross Yemen. But the journey was by far the hardest thing she had ever experienced. She has been raped by the children of her countrymen twice until they cross the Saudi Arabian border. She suffered from this illness for a long time. But her hope for a change in her family's life has made her work hard. She worked hard as a domestic worker for 11 years to improve her living and earning a living. After 11 years, she returned to work in her home country, hoping to get married and believe that her family's life had improved. However, she was unable to start a job that protected her from the money she was sending to her family, lost her marriage promise and returned to Saudi Arabia.

On her second visit, she gnashed her teeth and sent money to her country for 8 years until she could get enough. She is now 37 years old. She did not need to stay any longer and returned to her country. She started a small business with the money she saved. Two years after her return to her home country, her work began to spread and she began to show a bright future. She hasn't been married yet, but she's happy with her job. However, when the extremists who tried to appease her and others like her plundered and destroyed Muslim properties, they also made Jamiela a place of business. One night, Jamielam lost her hand, and her hopes of marriage and family homelessness came to an abrupt end. But Jamiela's hopes were turned to extremists when they said they were dancing.

Woyzero Wubalem speaks the truth || She needs our help 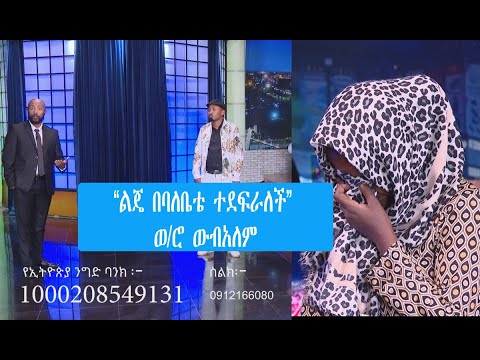 She was the first daughter of her family, and most of the household responsibility was placed on her. She was only 18 years old when her mother was be...